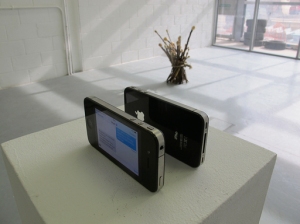 “The Contemporary Art Practice course has a fine art focus, offering students the environment to experiment, to investigate processes and challenge themselves. Says lecturer Alan Holligan, “We offer a very broad range of contemporary practices so people can specialise in sculpture, 2D practices, 3D practices or mixed practice. Usually they make decisions based on the courses they specifically want to go to, wherever that might be. They’re encouraged to work into areas that we as lecturers don’t necessarily have expertise in. I think in some courses they’re supposed to stay within the knowledge of their lecturer, which is why there’s often an emphasis on painting, an emphasis on sculpture, whereas we’re very clear that the students’ ambition shouldn’t be set by our skillset. They need to outreach that and often we have to keep up with them, which is good for everybody concerned.”

This year’s class first exhibited in the working professional environment that is the Edinburgh Sculpture Workshop, before transferring a pared-down version of the show to Summerhall. They’re a mixed bunch, exploring a wide variety of disciplines with varying degrees of success. Still at an experimental stage in their practice, this is to be expected. However, some students display a striking level of ambition, notably Jay Easton, who delves into the realms of technology to present work which aims to pose challenging questions. In ESW, two iPhones communicate with one another, displaying the mundane chatter between a couple. With the human protagonists removed from the equation, the relationship is reduced to two screens interacting eerily.

In Summerhall, Easton displays two QR codes, one on a slate (redolent of history, sculpture, early man) and one on a box afixed to the wall. A hasty download of a QR scanner (the technology seems a bit retro already, ironically) reveals the works to link to texts on his blog meditating on the dangers of an unconsidered embrace of technology, and the parallels of Pandora’s box, respectively.

He’s now off to GSA to delve further into his research. Like many in the Let’s Glow showcase, Easton is at an interesting point in his development. The bright prospects each has before them suggests this will not be the last we hear of them.”

There was an error retrieving images from Instagram. An attempt will be remade in a few minutes.